These  Works Have Received a 2020 Creative Communities Award
& Are at LeMieux Galleries Online Show f
n
In the Latin American tradition, it's the job of the artist to remember and speak the people's truth against the "official lies." This exhibit is a creative response to honor our Latin American immigrant community that has contributed to the rebirth of a city once on it's post-Katrina deathbed.

I cannot bask in a privilege that I'm not afforded to make art for art's sake when the attacks on my Brown body and my immigrant community are more than abstract. Our immigrant people have given of their blood, labor, and love to rebuild a city that has exploited their labor and ignored their human suffering.

On a universal level, these large mixed media works on paper celebrate the humanity of a people dehumanized as "illegal aliens," and challenge the raging anti-immigrant hysteria gripping these United States of Amnesia, a system that seduces you to forget it readily exploits the labor of the same immigrants it vilifies.

On Saturday, September 8, 2018, these new works-on-paper were seen by some two hundred people plus that attended the opening of Hard Living in the Big Easy: Immigrants & the Rebirth of New Orleans, and audiences experienced large pieces and inventive Photo Retablos / assemblages that honored the immense contribution Latin American immigrants have made to the reconstruction.

In the near fifteen years since the storm, it's the only such visual arts exhibit with works created by a Latino immigrant, and one branded as a real-life "refugee." I escaped the post-storm social chaos that erupted after the natural tempest on a stolen school bus three days after the levees breached on September 1, 2005. I was on the same bus the iconic composer and native son Allen Toussaint rode out to safety after the under-funded federal levees breached in Katrina's crosshairs. I returned a month later on October 1, and saw hundreds upon hundreds of Latin American immigrant workers on every rooftop. They were an army of reconstruction angels, and hundreds of Brown hands laid down hundreds of miles of blue plastic tarp to repair hundreds of damaged houses.

Speaking in Spanish, I immediately began documenting their stories through conversational interviews on the streets. Later, I began more formal filmed interviews, and by February of 2006, I was contributing commentaries that aired on NPR's Latino USA weekly news journal. From 2006 to 2011, I contributed radio pieces that aired nationally--covering the many challenges of the epic reconstruction, and have written numerous published articles that document the immigrant contributions to our post-Katrina rebuilding.

I have developed a number of performance art projects that have brought our immigrant stories to the stage. These works offer a pictorial chronicle of immigrants who are being disappeared on the streets, in local history books, and in the collective memory of a renovated city looking to discard its most vulnerable work force.

Tragically, the Louisiana Endowment for the Humanities (LEH), a state arts agency, published the official 2018 Tricentennial anthology titled New Orleans & the World, and their scholars literally disappeared our Latin American immigrant community from current history--as if we did not even exist. Their book has culturally deported our people from the reconstruction narratives. It's brutally traumatic to "bear witness" to the power a state arts agency holds to disappear our people from history, and even more inhumane when it's an agency that carries "humanities" in their moniker.

I have been holding the LEH and their scholars accountable for their egregious omission for the past three years, but they have retreated into the refuge of denial afforded by their white privilege. This body of works-on-paper challenges their cultural deportation of our immigrant reconstruction workers from local history, and it serves as a visual history chronicle of public protests of a Latin American people and families demanding their human rights.

Most of these drawings are inspired by the many photographs of pubic protests I've taken of the ﻿﻿﻿Congress of Day Laborers / El Congreso de Jornaleros﻿﻿﻿, the immigrant activist group that has worked vigilantly to bring attention to the injustices suffered by a community that has done all the heavy lifting of an epic recovery.

The exhibition title expresses the irony experienced by an immigrant community that has contributed to the rebirth of a "Big Easy" city, but continues to be neglected while enduring a myriad of human rights violations, from wage theft at the hands of ruthless contractors to brutal deportations breaking up local families.

Five years in the making, these drawings are rendered in charcoal, pastels and conté on Arches paper, and the dramatic figurative compositions echo the influences of German and Mexican expressionist artists from Max Beckman to the figurative paintings of José Clemente Orozco, Diego Rivera, and David Alfaro Siqueiros. Also, they resound with political overtones found in British artist Sue Coe’s images, and the surreal figurative work of the contemporary Cuban José Bedia.

My aim is to forge pictorial narratives that document the epic struggles of immigrants during a time of persecution. Latin American immigrants have been a big part of the rebirth of New Orleans, but they have faced a clear and present danger over the past four years with a hostile administration in the White House--as they struggle to remain in a city they have helped to rebuild.

The workers and families who helped rebuild New Orleans live in terror today … If they leave their homes to walk their children to school, if they go to the laundromat or the barber shop or the grocery store, they will be targeted for nothing more than looking Latino, and their families might never see them again.
--Bill Quigley, Professor of Law Loyola University
(from "Why I stand with immigrant workers who rebuilt New Orleans." nola.com Editorial 2013)

Professor Bill Quigley is a long-time supporter of the Congress of Day Laborers, and this quote was emblazoned on the gallery walls.

Mixed Media Works: A battery-operated moving second-hand clock is placed at various points of some compositions, and such mixed media elements push these drawings beyond being static images. The moving second-hand is a symbol of the beating hearts of immigrants working in the shadows, and their tenuous position because their time may be up at any second due to the undocumented status of many.

The drawings are mounted on wood panels used as reconstruction materials, and magnet letters spell out various statements that include "Stop the Raids" and "No Human Is Illegal." Magnet letters often used as playful word decor on home refrigerators now express the political urgency of the moment such as "We Are Human," and it echoes the cries of the Civil Rights movement, "I Am A Man."

Funded in part by the 2018 Platforms Fund & a Jazz & Heritage Festival Community Documentary Grant
This series was initially developed with the support of Space One Eleven in Birmingham, AL
in April 2013, and supported by a Visual Arts Network (VAN) Residency.

Press Links: WWNO 89.9 FM / NPR Profile on INSIDE THE ARTS with Diane Mack

At his exhibit Hard Living in the Big Easy: Immigrants & the Rebirth of New Orleans at UNO St. Claude Gallery, local artist-activist Jose Torres-Tama prefaces his work with a reminder that this city's recovery from Katrina largely was built oH the backs of thousands of sometimes undocumented Hispanic workers who did the heavy grunt work with admirable efficiency. His drawings stylistically hark to the turbulent history of revolutionary labor movements as imagined by renowned Mexican and German artists, and while conceptually relevant to current controversies emanating from the White House, their melodramatic look flamboyantly merges art’s historical sensibilities with America's conflicted social subcurrents. --D. Eric Bookhardt GAMBIT Weekly Review

Collaborating Artists:
For the opening event, Roberto Carrillo offered a live intermittent 12-minute music performance once every 45 minutes, and played an Andean-music soundscape to remind us that the reconstruction workers of New Orleans are descendants of Aztecs, Maya, Zapotecs, and other indigenous people of the Hemispheric Americas.

Tshombe Tshanti filmed and edited the video installation on display that documents the development of these works on paper. Titled after the exhibit, this film short also chronicles the cultural deportation delivered by the Louisiana Endowment for the Arts (LEH), the state arts agency that published the official 2018 Tricentennial anthology tilted New Orleans & the World.

The privileged scholars of this much-heralded publication have disappeared our immigrant community--as if we did not even exist, and the most neglected story of the 2018 Tricentennial celebration was the contributions our immigrant people have made to the literal rebirth and resurrection of New Orleans. Not one Latin American writer was included in their book, and the LEH has rendered our Latin American immigrant community invisible. 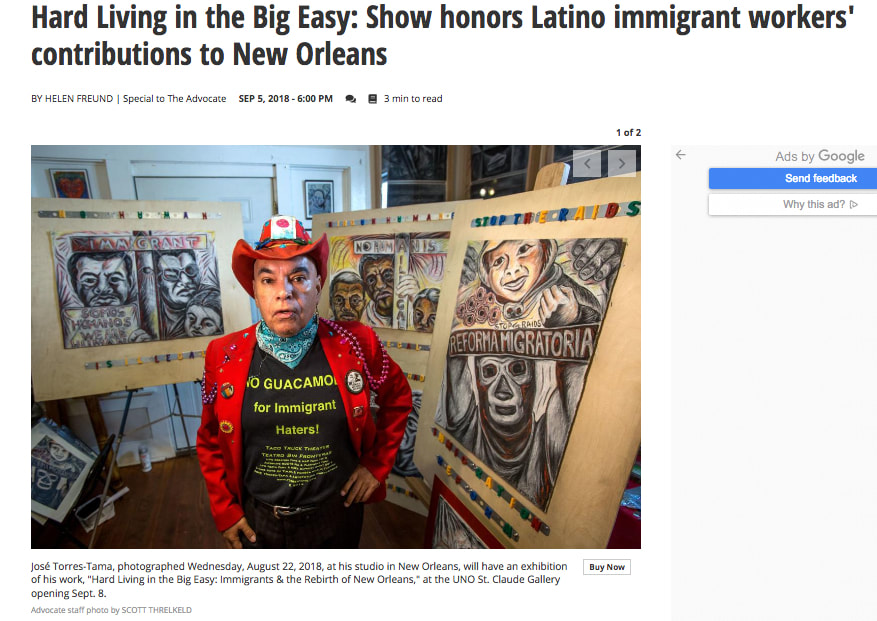