Cyber Activism in Pandemic Times
​
VIDEO CORTADITOS & Picante Performance Poems
is an audio visual series of provocative YouTube shorts created by performance activist José Torres-Tama (JTT) during the pandemic while sheltering-in-place in the early lockdown from April to June 2020. They are informed by his politically charged spoken word poems. Bruce France created some of the dynamic video designs in the first three pieces with the hallucinatory soundscapes of
JTT’s long-time music collaborator known as Audio Dali.
The stage performance photos were captured
by Craig Morse and Tshombe Tshanti.

These provocative videos are creative responses to GrinGoLandia's fear of the Spanish language and interracial love-making; the Confederate-flag-waving-right-wing militias in Michigan; the neglected crisis of immigrants infected of Covid 19 in crowded captivity of rural Louisiana ICE Jails; and the Black Lives Matter                 protests to the continuous killings of unarmed African Americans by white police.

Symbolic Opponent Syndrome / SOS / Remembering the Dispossessed
is the longest short at 10:15 mins and plays like a mini-doc dedicated to the memory of
Ahmad Arbery, Breonna Taylor, and George Floyd,

These Picante Performance Video Poems are precursors to JTT's forthcoming spoken word                               and music sound-art project and EP called Speaking Truth to Perverse Power Vol. I.
It will be released on various music platforms in the very near future of the sci-fi fiction year 2021.

The VIDEO CORTADITOS have been featured as part of JTT's new program called
Cyber Activism During Pandemic Times, and used as educational tools for the
University of Virginia Dept. of Theater & Drama; UC Davis' "Imagining America" Virtual Conference;
St. Mary's College Dept. of Literature "VOICES" Program; ASU West's Theater Seminar;
and for the Graduate Studies Program at University of Memphis.
y of Virginia 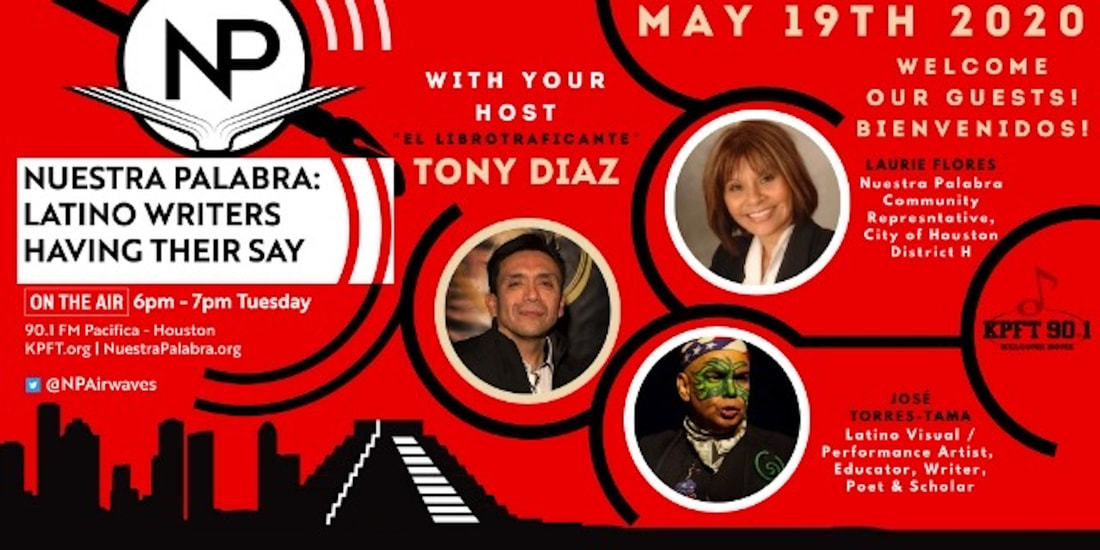 National Press: Pacifica Radio
NUESTRA PALABRA: Latino Writers Having Their Say
is a PACIFICA RADIO show
out of Houston on 90.1 FM, and hosted by writer and nationally renowned activist Tony Diaz.
On May 19, 2020, they aired an interview with José Torres-Tama, and debuted 3 of the first
Video Cortaditos. Tony Diaz reported that NP audiences were thrilled
to hear three of the full sound and music pieces over the radio.

Below is the archived SoundCloud Link:


This YouTube VIDEO CORTADITOS series is supported in part by a
2020 National Performance Network (NPN) Documentary & Storytelling Fund award to Torres-Tama.
​This is an ArteFuturo Productions project in an early collaboration with Bruce France Media.

The last three in the series of VIDEO CORTADITOS are Video Selfies JTT has created with
performance poems in "live art" costumed personas addressing artists' needs during the pandemic; the oppressive knee of white supremacy that killed George Floyd; and the dark origin story of the "United States of Amnesia" that seduces its people to embrace forgetting the so-called "beacon of democracy" was founded on genocide and enslavement.