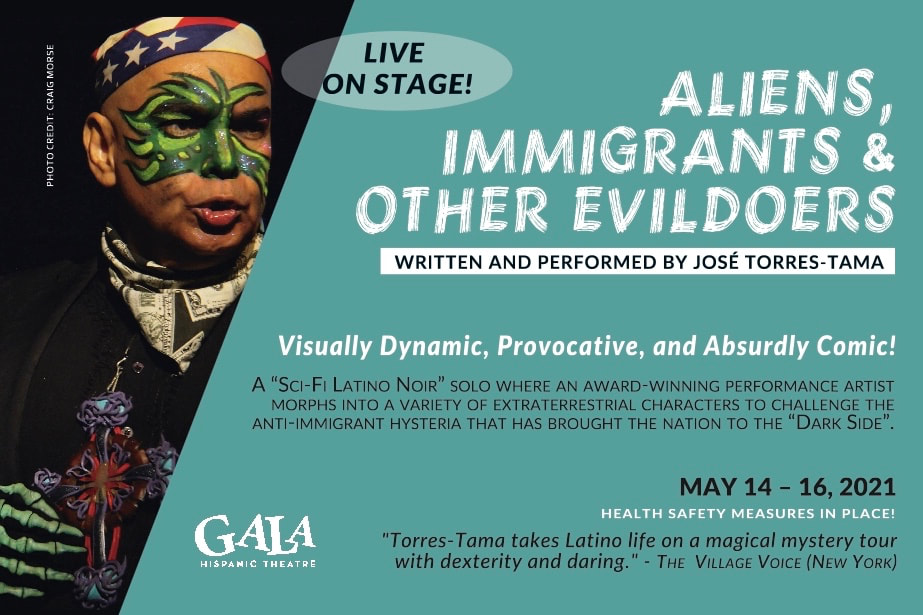 ﻿﻿
﻿﻿﻿The performance is timely, intelligent, heart-wrenching, thought-provoking, and quite funny. In Aliens, audiences are able to see a performance artist at the top of his game. ﻿﻿Aliens is a necessary theatre that sparks conversations about the hardships faced by the undocumented community and asks audiences to consider what we might do to address these inadequacies.﻿
--- The Theatre Times ﻿﻿

In a scintillating, utterly absorbing seventy-five minutes, Mr. Torres-Tama dissects the current immigrant situation from a personal viewpoint that reaches back through American history to its earliest days and follows that thread to the present moment… It is a revelation of historical fact, and an accounting of the current political situation, all delivered with highly entertaining vigor. José Torres-Tama is a performance artist of the highest calibre. -—LA Theatre Notes

After all the ALIENS national and international touring projects were wiped out with the Covid lockdown in March 2020, GALA Hispanic Theatre in DC is mounting two performances only of this acclaimed sci-fi Latino noir solo for Friday and Saturday, May 14 & 15, 2021 at 8pm.

About ALIENS: With the anti-immigrant hysteria reaching brutal proportions and the 2019 killings in El Paso, award-winning performance artist, published poet and playwright José Torres-Tama takes on the haters in ALIENS, IMMIGRANTS & OTHER EVILDOERS, and offers an inventive tour de force of heroic stories with heart, humanity, and humor that challenge the vilification of a people in search of the elusive "American Dream."

In the Latin American tradition, the artist bears a social responsibility to articulate the people’s struggle--la lucha de le gente--when they are denied effective means to have their voices heard against oppression. ALIENS is a creative response to a system that strategically attacks immigrants while exploiting our labor. If artists do not challenge such hypocrisies, then we abet the abuse of power with our silence. --JTT

ALIENS, IMMIGRANTS & OTHER EVILDOERS is an inventive sci-fi Latino noir performance solo that exposes the hypocrisies of a system that vilifies the same people whose labor it readily exploits.

Satirizing the absurd status of immigrants as “extraterrestrials” through a sci-fi prism informed by comic film shorts inspired by Star Wars and The Matrix films, Torres-Tama deftly shape-shifts into a variety of “aliens” who challenge a nation that has migrated to the “Dark Side”, and offers a clarion call for the United States of Amnesia to remember the words emblazoned on its iconic Statue of Liberty, Give us your poor, your huddled masses yearning to breathe free, the wretched refuse of your teeming shore.

Also, ALIENS chronicles the rise in hate crimes against Latinas/nos, whether they are US citizens, permanent residents, or undocumented people. The dehumanization of immigrants has spiraled into a societal norm where all brown Latinos are seen as suspect--akin to terrorists and demonized as political scapegoats. Developed by a docu-theater process of filmed interviews the artist conducted with heroic people who shared their epic border-crossing stories to escape economical and political despair, the profoundly moving performance has been critically acclaimed for putting a human heart and face on the persecuted immigrant.

ALIENS was developed through a National Performance Network Creation Fund Award from the NPN, and co-commissioned by the Ashé Cultural Arts Center in New Orleans, MECA in Houston, and GALA Hispanic Theatre in Washington, DC.

What Critics Say about ALIENS:

Torres-Tama brings his take on immigration to the Guadalupe.  ---San Antonio Express

An adroit performer and lucid writer, José Torres-Tama bravely takes us to the dark side where most dare not to go. ---DC Theatre Scene

The multi-media “Aliens,” while at times laugh-out-loud funny, provocatively explores the history of immigration then and now in the United States …  is an eye-opener, and perhaps a mind-opener and heart-opener.  ---Bethlehem Press

The performance artist has to have the courage to expose his/hers/their open wounds
on stage for personal pains to speak to our universal truths. --EL JTT
Since 1992, José Torres-Tama has written eleven different solo shows including his critically acclaimed The Cone of Uncertainty: New Orleans after Katrina, which chronicled his dramatic escape on a stolen school bus three days after the levees breached in September 2005.

The Cone of Uncertainty: New Orleans after Katrina (Toured nationally & Internationally from 2005-2011)

At the invitation of Leo Garcia, Highways ED, The Cone of Uncertainty was mounted at Highways Performance Space in Santa Monica, CA by November 2005--three months after the apocalyptic abandonment of New Orleans and its people by the Bush Administration.

It was the first show on the stages of the country written, created, and performed by an actual survivor of the storm and "Katrina refugee". In addition, The Cone remains the only performance on national stages that immediately chronicled the contributions thousands of Latina/no immigrants made to the reconstruction, and the myriad human rights violations they were subjected to while resurrecting New Orleans from the dead.

In the fall of 2006, then Ohio State University Theater Dept. Chair, Dr. Leslie Ferris, invited José for an artist-in-residency program that was crucial to the development of The Cone. In fall 2007, The Cone was presented to 300 scholars at the Association of Theater in Higher Education (ATHE) Conference in New Orleans, and Torres-Tama brought them to their feet with this deeply emotional, visually engaging, and politically provocative performance  while the city was still in ruins and in full recovery mode--only two years after the federal flood.

From 2005 to 2011, The Cone of Uncertainty toured nationally and internationally, and was performed at Roehampton University and Live Art Development in London, the Bluecoat Art Centre in Liverpool, and the Centre for Performance Research in Aberystwyth, Wales. American Theater Magazine profiled The Cone of Uncertainty tour through the UK and Wales in their May 2009 issue.

In U.S. academic institutions, The Cone was presented at Vanderbilt University, University of Maryland, University of Michigan at Ann Arbor, New World Theater at U Mass Amherst, Kalamazoo College, Geneseo State University of New York, GCSU, LSU, and others.

$CASINOAMERICA$: A Performance Chronicle of the Hoboken Fires & a Culture that Glorifies Greed
(Toured nationally & Internationally from 1996-2003)

Other performances include $CASINOMAREICA$, and this is the only performance that chronicles the Hoboken Fires of the 70s and 80s that burned out a community of Puerto Ricans, Cubans, and Ecuadorians in one of the most brutal cases of "urban renewal" and gentrification exacted on people of color. It was hailed as a "Renaissance" for the Square Mile city at the edge of the Hudson. City elders have done everything possible to bury this history, and the tenement buildings were renovated as high-price condominiums with a view of the Manhattan Skyline.

We lost family members in those brutal fires that burned my people out of Hoboken, and it took me 20 years to begin exploring this trauma through performance art. --JTT

Hundreds of Latina/no families were displaced while many men, women, and children were burned alive in LATE-NIGHT landlord-arson fires exacted for SPIC REMOVAL! $CASINOMARICA$ also toured internationally, and was performed at Schindler's Factory in Krakow, Poland for an international performance festival in 2003 and the PERFORMA 2000 International Festival in Maribor, Slovenia.

It too received critical acclaim, and Torres-Tama's wok began developing greater national attention. In 1996, he was awarded a Regional Artist Project Grant from the National Endowment for the Arts to first develop $CASINOMARICA$ as a performance installation in New Orleans.

What Critics Said of $CASINOAMERICA$:

Torres-Tama is both a versatile writer who can be lyrically evocative as well as bitingly humorous, and an impressive performer.
---The Philadelphia Inquirer

CasinoAmerica knows how to keep the eye and the ear stimulated and the mind engaged... Torres-Tama combination of imagination and technique is impressive. ---The Times Picayune (New Orleans)

Dressed in black but wearing a red cape as he dons the role of El Mephisto Moderno, Torres-Tama takes the audience on a ride through human weakness. It is often funny, and sadly true.
---Art Papers (Atlanta)

His dramatic monologues maintain that notion of chance and mirror our culture's exploitation of one another and our apparent oblivion to that invasive cancer of greed.
---New Orleans Art Review