JOSÉ TORRES-TAMA & ARTEFUTURO PRODUCTIONS
I aspire to forge performances that exemplify a divine marriage between experimental form and socially conscious content. I cannot bask in a privilege I'm not afforded to make experimental theater about nothing because the urgency confronting my brown body and my immigrant community is far from abstract. -JTT 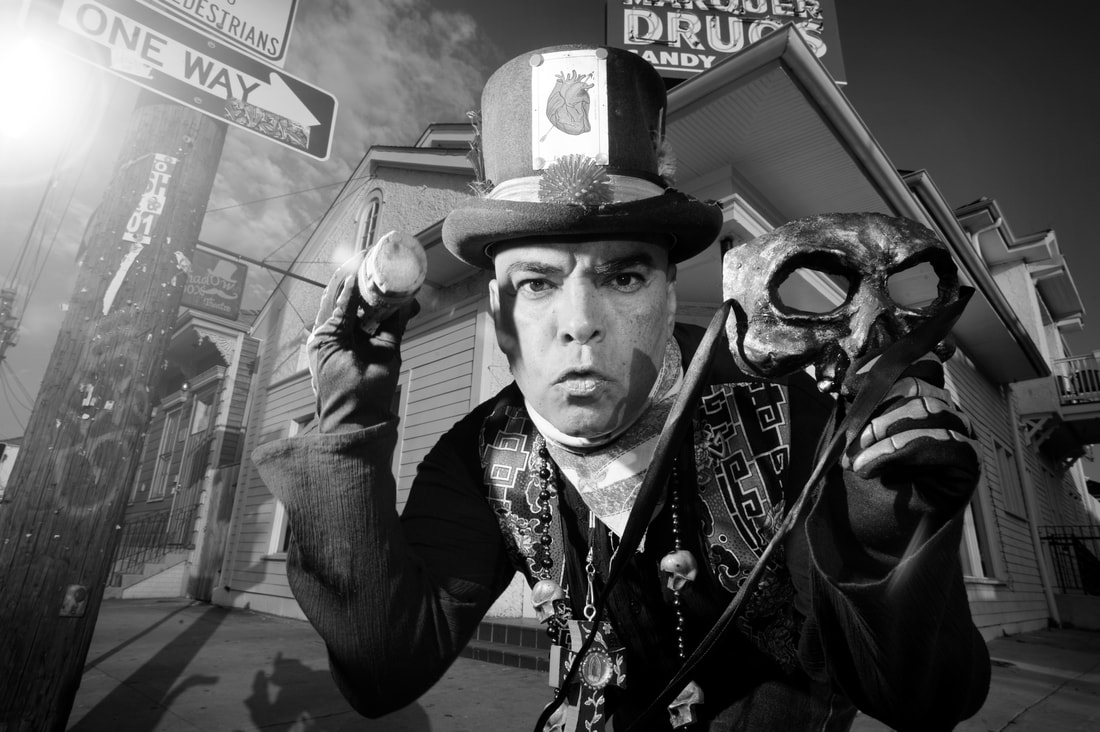 Photo: Ben Thompson--
I hold steadfast to a belief that artists can serve as the conscience of our times, and create work that speaks a people's truth in contrast to official lies. All we have is our memory against a celebrated and imposed amnesia, and as an artist, it's my job to remember. --JTT

José Torres-Tama is a published poet and playwright, journalist and photographer, renegade scholar and arts educator, visual and performance artist, cultural activist and Artistic Director of ArteFuturo Productions in New Orleans. He explores the effects of mass media on race relations, the underbelly of the “North American Dream” mythology, and the anti-immigrant hysteria currently gripping the United States of Amnesia, which seduces you to embrace forgetting.

Since 1995, he has toured his genre-bending shows nationally and internationally, and has performed at Roehampton University and Live Art Development in London; the Bluecoat Arts Centre in Liverpool; the Centre for Performance Research in Aberystwyth, Wales; and performance festivals in Poland, Slovenia, Canada, and Mexico. In the academy, Duke, Vanderbilt, Cornell, Ohio State University, University of Michigan, University of Maryland, Tulane, LSU, UCLA, and many others have presented his provocative spectacles, interactive workshops, and "Live Art" multimedia lectures on performance as a catalyst for social change.

He is a 2015 MAP Fund award recipient for his radical dinner theater on wheels titled the Taco Truck Theater / Teatro Sin Fronteras, an ArteFuturo Ensemble project that crosses economical, geographical, and racial borders. Also, he has received a Regional Artist Project award from the NEA for his genre-bending performances and a Louisiana Theater Fellowship. The National Association of Latino Arts & Culture (NALAC) in San Antonio awarded him a 2016 Fund for the Arts Grant for his Taco Truck Theater show debut in New Orleans, and he received a 2016 New England Foundation for the Arts (NEFA) Capacity Grant to re-purpose a used vehicle into a mobile theater.

His current touring solo show, ALIENS, IMMIGRANTS & OTHER EVILDOERS, is a sci-fi Latino noir performance that exposes the hypocrisies of a system that dehumanizes immigrants while readily exploiting their labor, and was developed through a National Performance Network Creation Fund award. ALIENS has sold out a two hundred seat-theater at Vanderbilt University; all three nights presented by Pangea World Theater in Minneapolis; and the two shows at the Los Angeles Theater Center’s 2014 Encuentro National Festival.

Performance Space 122 and Theater for the New City in New York, GALA Hispanic Theatre in DC, the National Hispanic Cultural Center in Albuquerque, Living Arts of Tulsa, the Contemporary Arts Center in New Orleans, and the Los Angeles Theater Center are among many arts organizations that have also presented his provocative work.

From 2006 to 2011, he contributed commentaries to NPR’s Latino USA news journal on the many challenges of the reconstruction of New Orleans post-Hurricane Katrina. Diálogos Books New Orleans has published Immigrant Dreams & Alien Nightmares, a debut collection of twenty-five years of poems that have informed seven solos.

Also, he is the recipient of a 2008 Joan Mitchell Foundation Award for the publication of his first art book by the Ogden Museum of Southern Art called New Orleans Free People of Color & Their Legacy, which documents his expressionistic pastel portraits of 18th and 19th century Creoles of color who fought to dismantle the institutional injustices of their times. Hard Living in the Big Easy: Latino Immigrants & Rebirth of New Orleans  is a book in the making that chronicles his NPR commentaries and writings documenting the human rights violations experienced by immigrants post-Katrina.